Some of the journalists will also publish the film on their newspaper websites. And are interested in further news from us.

Jávea 25.02.2020: The fires in Australia for many people bring back memories of the terrible events in Jávea a few years ago when the whole town seem to be ablaze. The story of the film is about the last big fire in this area. How fast it all happened, the fear, the disbelief and the danger it created.

The film is also about how this huge catastrophe brought the international community together, no matter what nationality, colour or language. Facebook and the other social media were alive with offers of accommodation, support and help for those evacuated.

And after the fire there was a new story: something that makes people smile and some people even cry. One man (Miguel García) for no financial gain created something from nothing – out of the ashes carving beautiful wooden sculptures from the burnt smouldering tree stumps. He made new creations day after day.

Hollywood trained film producer Diane Gross comments on her project: “Those stories, stories demonstrating how we all work together, come together in times of crisis and show the strength of our community are amazing.  We are all still very human and some people even make beauty from catastrophe. It is touching, because we know deep inside, that every down has an up – out of a huge disaster something can grow that makes us stronger and better. This story is special, a happy disaster story! A story of being thankful, of positive energy and of not giving up.”

She named her film after the “Phoenix” the Greek mythology of the phoenix-bird that rises out of the ashes. Miguel, the artist, will create a unique Phoenix Sculpture for the film. In the Jávea recreation park “Pinosol” it will accompany all his breath taking other sculptures and remain there as a symbol of the story.

Diane also set up a Facebook group named “Jávea Fire Stories”: https://www.facebook.com/groups/JaveaFireStories  for all, who want to share their stories about the fire or say thank you to all the people they received support from: Their neighbours, firefighters, local businesses and many more.

This special film project will only rise, if there is a visionary sponsor, who sees his chance in using the video as a unique opportunity for marketing.

If you are interested in the film project and using it as a modern way of implicit advertising or for just saying „thank you“ to the Jávea community check out the website of the film: www.oneminute-pr.de/phoenix-film-project/

Please come and visit the filming but don’t publish the exact time and place. Film shooting Saturday 29nd  9am to 11am. Please inform us if you will come. 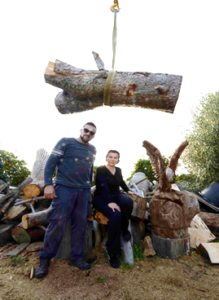 1a) Film Producer Diane Gross and Sculpture Artist Miguel García under lifted tree trunk by a crane. This trunk will become the wooden sculpture. Shot at Miguel’s storing and working base near Pinosol Recreation Park, 19th of Feb.2020 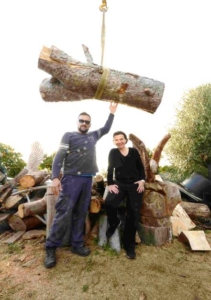 1b) Alternative to 1a 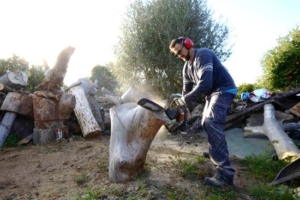 2) First carvings for the Phoenix sculpture (lower end). Shot at Miguel Garcías storing and working base near Pinosol Recreation Park, 19th of Feb.2020 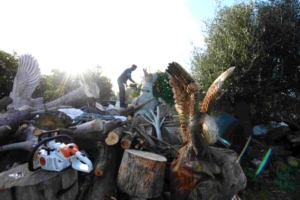 3) After choosing the tree trunk for the Phoenix sculpture Miguel García cuts it for lifting it out with the crane. Shot at Miguel Garcías storing and working base near Pinosol Recreation Park, 19th of Feb.2020

4) Miguel Garcías at his storing and working base near Pinosol Recreation Park, 19th of Feb.202o 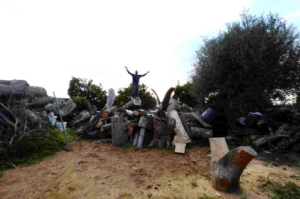 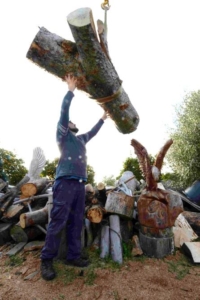 5) Lifting the tree trunk, that will become the Phoenix sculpture out of the storage pile of wood. Shot at Miguel Garcías storing and working base near Pinosol Recreation Park, 19th of Feb.2020

Download link via Wetransfer: https://we.tl/t-aCOIOhipr8 (valid till 3rdh of March, 2020) >(please ask for a new link)

>>>back to main page 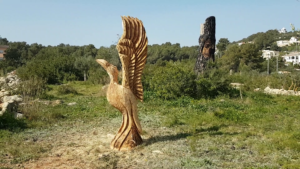 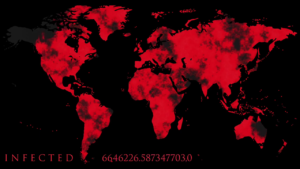